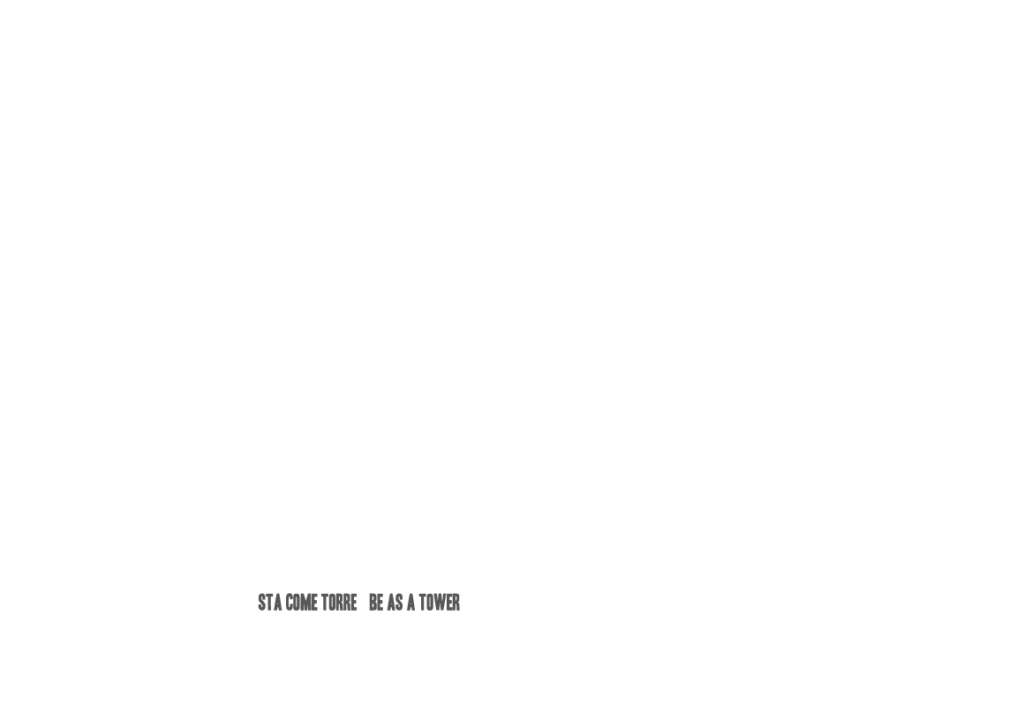 Be as a Tower

We are just coming out of weeks of total isolation. Each of us has experienced what it is like to be forced to live in perfect isolation -or with few other loved ones- in what we felt to be an incredibly overwhelming and extreme situation. Extreme for us, but not for those who come from the sea.

The Sea is a state of mind.

The sea is like a dress sewn on the Puglia Region, which is surrounded by water along its 865 kilometers of coastline [1]. The sea has been a major source of livelihood for many families, but over the centuries, countless dangers have come from the sea to which man has reacted by reshaping the architecture of the coastline. The Aragonese responded to these threats by building watchtowers from where they could watch over the coastline. A 1532 Vice royal order required private persons to build towers, but it was not until 1700 that this building effort was finalized: by that time 379 coastal towers had been built throughout the Kingdom of Naples, 131 of them were located in Puglia.

The rationale behind the construction of these towers is clear and precise: these watchtowers allowed to watch over the sea, the horizon, the hinterland, they were built close enough that each tower could communicate with the towers on either side and send light and smoke signals, thus passing the word of danger quickly and effectively or calling for help.

Artists have always served as watchtowers, as radars: McLuhan argues that inherent in the artist’s creative inspiration is his/her ability to subliminally sniff out the changing environment around him/her.” In the electric age the artist steps out of his/her role of individual “author” isolated from everything and everyone and puts his/her art making and creative effort at the service of the community. The artist is able to look beyond the horizon, to anticipate times, fashions and trends.

The exhibition Sta come Torre/Be as a Tower revolves around the artist-tower analogy: much as a tower provides an excellent view point to scrutinize the horizon, an artist, through her/his creative art making process and works, allows us to reflect on contemporary themes, on the threats and opportunities of our times, on what we have learnt from the past, and what we are going to leave to future generations.

But, in addition to being named after the homonymous winning project by architect and sculptor , for the realization of the Monument to the Sailor of Brindisi, one of the six non- accidental locations of the exhibition, the name of the exhibition recalls a verse from the fifth Canto of Dante’s Purgatory, a verse that lends itself so well to the concept of this exhibition:

“Come after me, and to their babblings leave The crowd. Be as a tower, that, firmly set, Shakes not its top for any blast that blows.”

Seven artists guarding six in an exhibition which is itself architecture, design, infrastructure. Each tower is an outpost of the six provinces of the Puglia Region: the choice of the locations mirrors a kind of geographical distribution of the cultural diversity of the shoreline: a former church, a 19th century “chalet”, an art museum, a monument, a port, an independent cultural center.

Each tower is manned by an artist and contains works from the previous and next tower. The towers are thus artistically and actively connected to each other. Six exhibitions talking to each other as parts of a large exhibition: not a travelling exhibition, but one and only exhibition that is itself a journey through the long stretch of the Puglia coastline and its extraordinary landscapes.

Paolo Mele was born in 1981 in the farthest point of Apulia. He was a researcher in Communication and New Technologies at IULM in Milan and a visiting researcher at the New School of New York from 2013 to 2015.

Since 2011 he has been the director of the organization Ramdom, which deals with contemporary artistic and cultural planning. He was Project Manager for the Foundation Matera – Basilicata 2019. Since 2015, he has also been the manager of the cultural and artistic centre Lastation, which is in Gagliano Leuca, the furthest railway station in the south-east of Apulia. In 2013 he started the project “Indagine sulle Terre Estreme” (Investigation into the extreme lands) which uses contemporary art to critically analyze the territory of the Capo di Leuca (the southernmost point in Apulia).

As an expert in cultural management and media, he worked for the Biennale of Young Artists from Europe and the Mediterranean (BJCEM) and with several international organizations. From 2018 to 2020 he held the role of Project Manager for the Matera Basilicata 2019 Foundation. Dal 2018 al 2020 ha ricoperto il ruolo di Project Manager per la Fondazione Matera Basilicata 2019.

In Lecce he was a co-founder and coordinator of the Observatory of Political Communication of the University of Salento and the cooperative P.A.Z., which deals with communications and media.

Destinazione Puglia, Regione Puglia – Tourism Department project that activates synergies between cultural and tourism promotion policies, is divided into some macro-actions. These include the enhancement of the network of coastal towns and towers implemented in collaboration with Teatro Pubblico – Regional Consortium for Arts and Culture and supported by ARET Pugliapromozione.

Aldo Patruno
Director of Department of Tourism, Economy of Culture and Community Enhancement

Sante Levante
Director of Department of Tourism, Economy of Culture and Community Enhancement